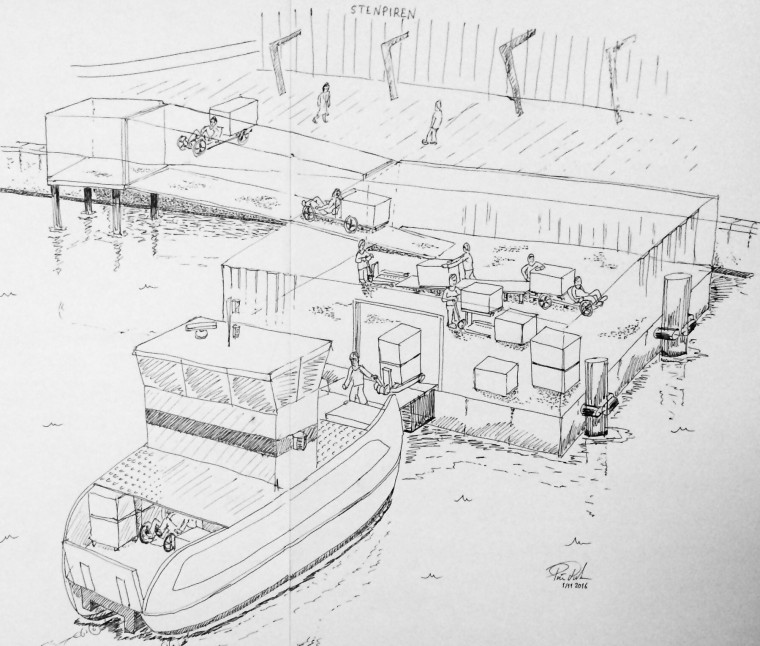 Open terminals are city-owned infrastructure where goods can be shifted from big vehicles to small, and vice versa. They are open for any actor to use, after negotiations with the city. The purpose is to facilitate methods for last mile delivery and first-mile pickup that is both more efficient for business and that creates more livable spaces for people. For example, they could support the containerization of city logistics.

Vans are clogging up city centers

A fully loaded van, used for distribution with many delivery points is not in itself an inefficient or otherwise problematic logistics solution. But problems begin when the van enters the city center Because of congestion, having to drive along pedestrians and having difficulties finding somewhere to park, productivity takes a severe hit. The van also adds to the congestion itself, creating a catch 22 for city logistics when delivery demand increases, with e-commerce and very fast deliveries.

When used for courier purposes, cargo capacity utilisation is also poor. The capacity is way too big for most deliveries, not seldom with ridiculous loads compared to the capacity, like a document or two servings of food. When owned by small businesses they also often have way too big load capacity and are also often standing still, further contributing to the low utilisation of vans.

Cargocycles is a realistic alternative to many deliveries…

In many cases, vans can be replaced by electric cargo bikes.

The advantages are multiple, even compared to electric vans:

For courier purposes, this shift is in full swing. Bike messenger businesses with regular bikes and light cargo bikes enjoy a strong growth.

…but a handover point is needed to fully utilise its potential

In many cases, however, vans are used to get goods from more than five kilometers away into the city center, and vice versa. These are distances where cargo cycles are often too slow to be cost-effective, and this is one of the reasons why you still see a steady increase of vans in the city center, even with a strong growth in cycle-based courier businesses.

A handover point is a solution to this, and we can also see that this starting to happen. Belgian startup Bubble Post sets up terminals a few kilometers from city centers, where truck and vans can leave their goods for a more efficient, consolidated, last mile delivery by cargo cycle or small delivery vehicle.

UPS are trying out a mobile depot approach, bringing in big containers filled with parcels into city centers, where cargocycle couriers meet up to manually collect parcels from the container.

These are both important steps forward, but could a city take on a more systematic approach to support the handover of goods from big vehicles to small? Is it an efficient use of valuable city space that every logistics operator set up their own city terminal or put their parcel containers on the street? Will it encourage consolidation efforts of any meaningful scale?

The city needs to provide infrastructure for city logistics

Many cities have indeed made attempts to take an initiative in city logistics, often with consolidation seen as the big enabler for more efficient city logistics. The argument is that it would be more efficient and space saving if there was only one vehicle instead of several doing the deliveries in the inner city. Many of these efforts have failed when project funding has ended and there is no working business model. Consolidation in the city is a costly extra step, and to offset that extra step you need to have some clever business model. A few projects make it after funding is over, for example by finding other revenue streams, like allowing commercial ads on the delivery vehicles (not really contributing to a more liveable city space). But also in these successful cases, they only handle a small portion of all goods flowing through the city. And what the cities often fail to see is that most of the problems caused by motor vehicles could be solved without expensive consolidation, if carriers would just switch to a better-suited vehicle to do deliveries in the inner city.

The problem with these city-driven consolidation efforts is often that cities and logistics researchers think they are experts in efficient and cost-effective logistics. They however often lack the commercial experience. The logistics operators, on the other hand, do have the experience, what they work with all the time is how to get stuff moved at the lowest possible cost, under given circumstances. But logistics operators also compete with each other, and hence only optimise their own operations, leaving the city with the inefficiency of multiple parallel logistics operations. On top of that, a lot of the goods flowing in the city is today not handled by logistics operators at all, but by businesses themselves, which is even less efficient.

This is why I suggest introducing the concept of open terminals, which limits the citys’ responsibility for providing infrastructure for city logistics, not designing business models for it. The open terminal enables logistics operators to overcome the gridlock of competition and be part of a better-organised city logistics solution.

Open terminals -how it works

An open terminal is a physical place with one main purpose: to receive goods from big vehicles coming from outside the city centre, and handing them over to smaller vehicles, better suited to do last mile delivery. They are also using the other way around, to receive goods from small vehicles that have done first-mile pickup (typically outbound parcels and material recycling) and hand them over to bigger vehicles.

An important aspect of the open terminal is that it is open to all actors and all types of goods. The city does the initial investment and should start with providing just some basic functionality, like being physically able to receive and dispatch goods and to provide enough security for the goods. Each logistics operator and business that want to use the terminals makes an agreement with the city, and pays for the services they use in the open terminal. The city is open to provide any extra logistics service, like refrigeration, short-term storage, cardboard compacting, space for consolidation by third parties etc.

With goods from different operators going into the same terminal, opportunities to consolidate goods will be made more visible. An important aspect here is that the city does not require consolidation. No more failed consolidation projects because of lack of a healthy business model. One probable outcome of introducing open terminals will be a growth of businesses specialised in last mile delivery, and they will for sure consolidate if they find it worth the extra cost.

Some inspiration can be found in this video from Haropa ports. Everything in the video might not be a feasible solution, but you can get the sense of what a city managed open terminal could look like at 3:09 (the concept, of course, works for land transport too):

The advantages with open terminals compared to consolidation centres are:

The advantages with open terminals compared to privately owned terminals are:

When the sea/shipping container was introduced many decades ago, it did away with the manual sorting of most shipments and the need for warehousing. It displaced many thousands of dock workers who formerly handled goods manually. Containerization also reduced congestion in ports, significantly shortened shipping time and reduced losses from damage and theft.

Containerization in city logistics could offer similar advantages as it has for long distance shipments.  To handle the container and not the goods when shifting goods between vehicles is more cost efficient and reduces risks of losing and damaging goods.

Open terminals can support containerization, as it provides the needed handover point. In terminals external to the city, goods are sorted for the exact streets where the goods are going and loaded in containers in sizes suitable for cargo cycles (appr. 1 m3) and small electric delivery vehicles (appr. 5 m3). As the containers are locked during transportation and handover, the risk of loss of parcels is significantly reduced. The handovers, both in and out, is fast in the open terminal and can even be automated if containers are standardised. It also facilitates even more automation in the future, when containers can go on autonomous vehicles for last mile delivery.

Containers can also be used for a new type of “semi-consolidation”. Several small containers can go onto a small electric delivery vehicle, so goods from several logistics operators go on the same vehicle, without the extra cost of sorting/consolidating the goods.

Open for everyone that needs to handle goods

As this is an open terminal, any business of any size can now use terminal services, not only the big logistics operators. For example, the small café owner that earlier used her own car or van to go shopping for soda in a warehouse in the outskirts of the city, will now see that this warehouse is making cost-effective shipments to the open terminal by buying services from a truck-based logistics operator, doing consolidating pickups with delivery to the open terminal. This makes it possible to have a cycle logistics operator to pick the soda up and deliver it to her. Or maybe the external warehouse, truck and cycle logistics co-operate, so she can just order directly from the warehouse, knowing that it will be delivered in an efficient and city-friendly way.

Something that would make it even easier to hand over goods to specialists in last mile delivery is an open goods management system, so every item gets tracked in one open system so there is no need for the last mile specialist to use each logistics operators’ proprietary ITS system (ending up carrying multiple different hand terminals). This development could, however, take some time, and to get started with open terminals fast, this can wait. There will be enough in this to motivate getting started asap anyway. I have no doubt there will soon be a logistics startup that will provide a solution!

An open terminal can also facilitate a shift from service vans to service cargocycles. For example, a painter who would use her van to pick wallpaper up at a warehouse in the outskirts of the city would now have the wallpaper delivered to the open terminal, making it possible to swap the van for a more productive and city friendly cargocycle.

As always, there is not one golden solution to all city logistics, and this also goes for the concept of the open terminal. Some types of goods is better handled without handing it over to smaller vehicles, even in city centres. But with open terminals up and running, it will be a lot easier for the city to introduce regulations for the inefficient vehicles they see clogging up its streets, as they now provide an alternative.

Johan Erlandsson will be speaking about Open terminals at the European Cycle Logistics Conference in Vienna in March 2017. 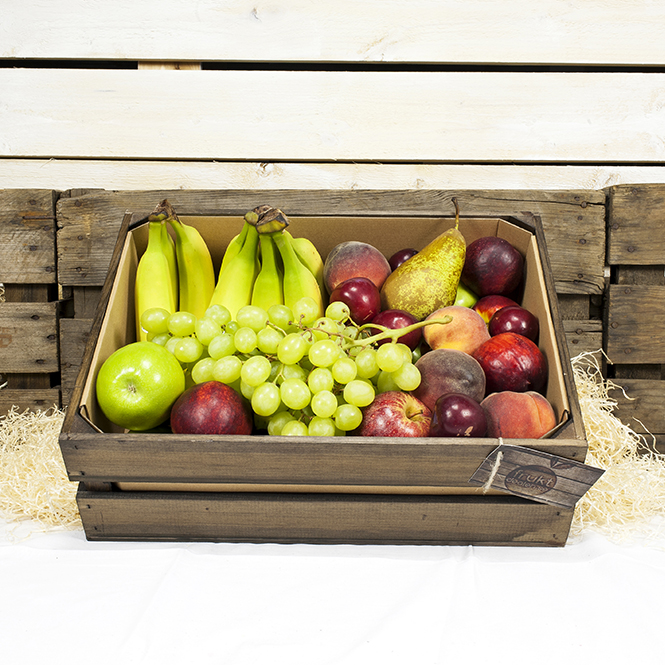 Three fruits a day keeps the doctor away! If delivered to your office by us we also keep vans away, reducing CO2 emissions and keeping the city nice! 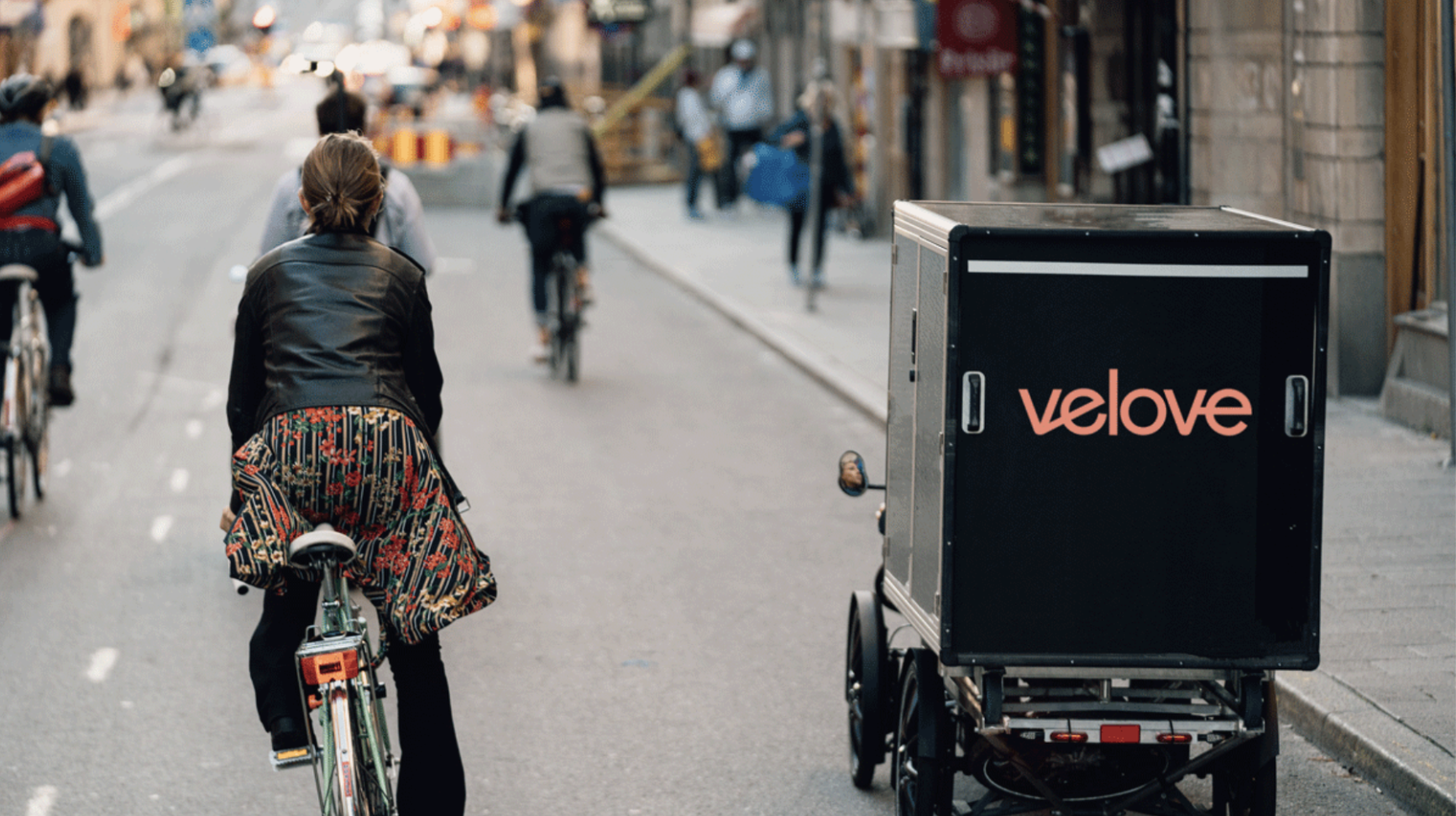 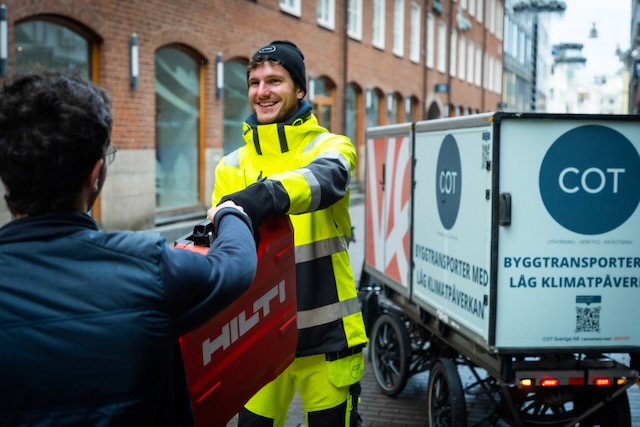