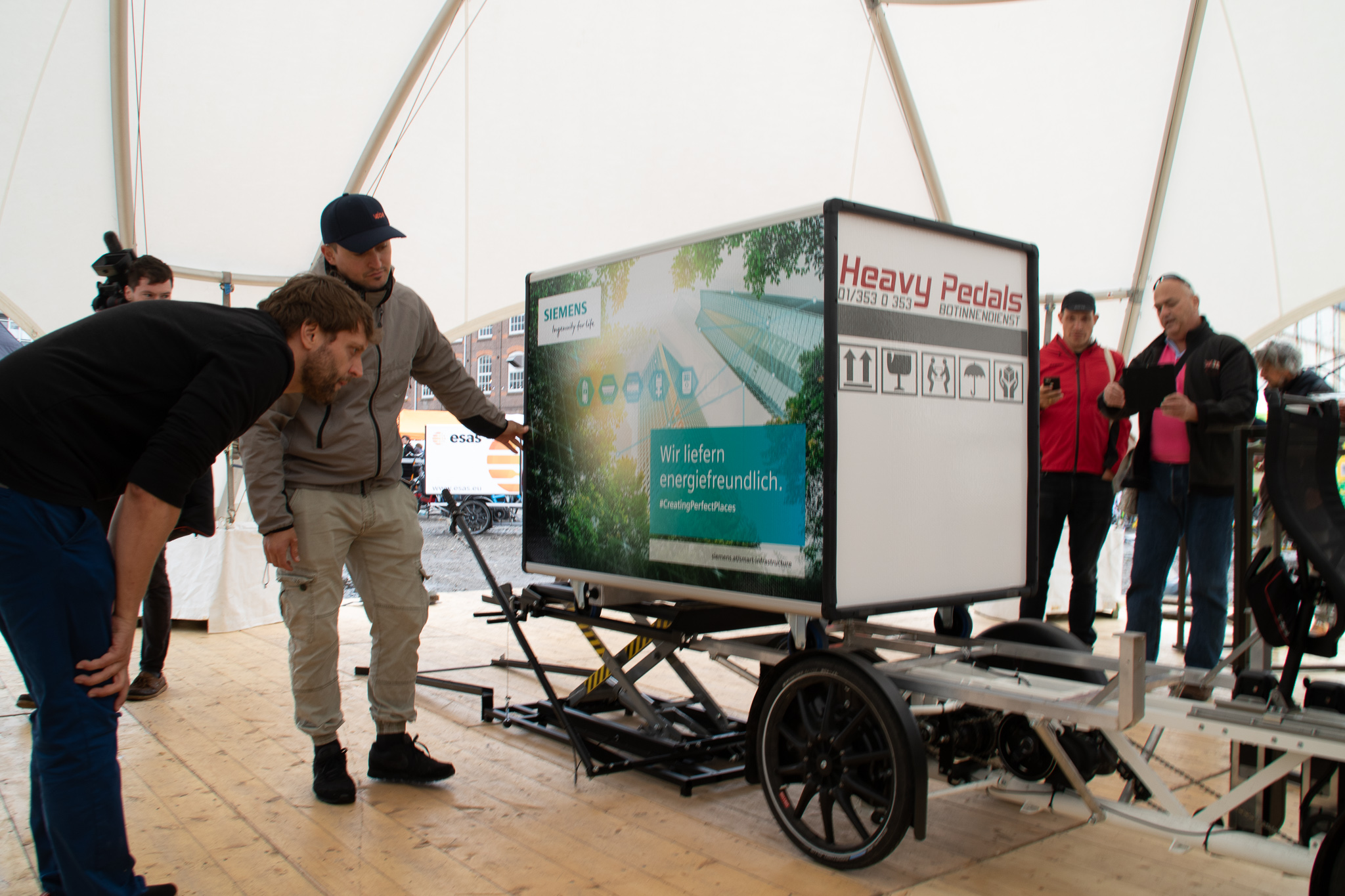 During the International Cargo Bike Festival in Groningen, a workshop was held on the topic of containerisation in last mile delivery. Paul Buijs from University of Groningen introduced us to the Physical Internet, Fredrik Lindqvist from Bring (Norwegian Mail) told us about how containerisation speeds up their express deliveries and I (Johan Erlandsson) gave some updates on what is going on in containerised last mile delivery. The audience was invited to discuss and we had a look at some new container handling equipment.

Paul introduced us to the concept of the "Physical Internet", a popular theory to discuss among logistics researchers. First, he presented the basics of how the Internet works. Anything that is being transferred, like a file, a website or streaming video is split up in smaller, standardised units and transferred using several communication standards. This allows for a flexible use of the infrastructure, always being able to send information via routes where there is available transfer capacity. If similar principles would be applied in logistics, the infrastructure could be utilised better. Primarily, it could mean a better utilisation of space in vehicles, which Paul says often travel with a lot of their capacity unused. The two components of the physical internet are 1.) even finer standardisation than what the shipping container and EU pallet offers today, often with examples of smaller units being able to combine perfectly into a Euro pallet

and 2.) better communication between logistics companies so they can easily use each others empty space without having to go into years of negotiation first.

Fredrik presented a containerised process they have just introduced to cut precious minutes in their express delivery service, where customers can have time critical deliveries picked up in the evening to have it delivered in another of Norway before 9.30 the next morning. This video explains how it works:

By pre-packing the container in the terminal outside of Oslo city center, the transfer of the parcels that need to be delivered before 9.30 is very quickly transferred to the Armadillo, no second sorting required and with no risk of parcel mix-up. Also, as the Armadillo has full access to all of the city and cuts through congestion this also means that total service quality can be increased.

The downsides of the process are:

My reflections from a couple of years of work with containerisation is that we are still in early days. We are a couple of actors trying out different concepts, and there is still work to do around hardware, business models, partnerships, city hubs and software before containerisation in city logistics will take off in big scale. I have become especially aware of that city hubs are crucial to have in place for any form of productive and city friendly city logistics, containerised or not, -it won't happen without it. But I do believe containerisation will happen -the potential productivity gains and cost savings are big enough to motivate further efforts.

Some updates from what is going on in containerised last mile delivery:

I did not take notes of the questions that came so there is a lot missing here. But I remember two of the topics that was brought up:

The Internet has standards. Who will set the standards for containerised city logistics?

No one had the answer to this question. I commented that we right now do not have the resources to work on standards -we are busy trying out different things together with our customers to make it work. I can also see that this was how containerisation developed in the shipping industry -there was a lot of trial and error first, before standards where set. I do think we need a little of that first so we can set a standard based on some real world experiences.

In the presentation we have seen several companies setting up their own city hubs. Is this really the way forward? Is this sensible use of precious city space?

It was city logistics pioneer Birgit Hendriks asking this question. Fredrik responded that they might allow a competitor to use their city hub. I asked Birgit to open up here existing city hubs for containers -then she could herself be a part of more efficient use of city space.

After the workshop we demoed some new equipment for safe and convenient city container handling in City Hubs.

My reflections after the workshop

The ICBF is a hectic place and you can't really reflect on a workshop while you are there. But now, a week later, it is possible!

The first reflection is around the interest for the topic. This was a breakout session, competing with some other very interesting workshops that I myself would have liked to participate in. Nonetheless there was a lot of people in the containerisation workshop so there is definitely an interest in this topic.

The second reflection is on the comments I got after the workshop, like "I didn't really believe in containerisation before this workshop -but now I do!" from a competitor and "I like your bikes but I like your containers more!" from a potential customers. Pretty strong messages supporting the idea that there really is something in this concept...

I think there is a lot from the ideas around the Physical Internet to pick up when talking about containerised last mile delivery, but maybe not everything. I don't see the need to introduce even smaller box standards to be able to "play Tetris" on a pallet or in a City Container -I can't see the practical benefits of this, it is taking the comparison with the Internet too far.

But the lockable City Container and a standard to share information about containers and their contents will absolutely open up for better utilisation of both vehicles and city hubs. Why don't carriers help each other out today to transport each others' goods when possible and profitable? I would say a big reason for this is that they have a customer promise to take responsibility for the goods. Can you really do that when shipments are transported in unlocked roller cages and handed over to a third party? I think it will make a big difference when goods are placed in locked, trackable City Containers. This will make it possible for carriers to let someone else transport and/or store the container for them for a while -just like it works for sea containers!

If things go well we might actually be able to try this version of the Physical Internet out in my hometown, Gothenburg. We are a few actors that is now applying for funding to try this out. All the components will be there: A City Hub, information sharing among carriers, City Containers, trucks and Armadillos. However the buzzword in this case is not called the Physical Internet, but "System of Systems"... Maybe a topic for the next ICBF! :) 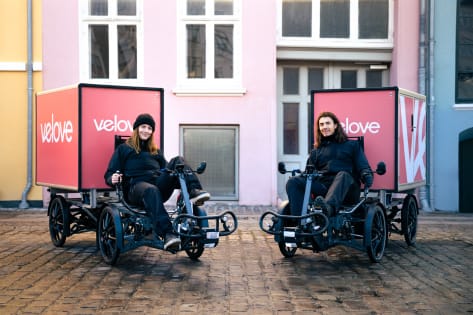 Velove raises € 1M in a seed round led by Almi Invest

Almi Invest's GreenTech fund invests appr. € 0.4M in Gothenburg-based Velove Bike's energy efficient and city friendly solutions for city logistics. Idealist and a number of private investors also participate in the total investment of appr. € 1M. With proven hardware and the recent award "International Cargo Bike of the Year", Velove Bikes can, with the investment, now expand its operations.

Send us an email. We would love to speak to you